Pondering the roles of Men, Power, Ego, and other Unanswerable Questions with Remahn Farley

Home >> Pondering the roles of Men, Power, Ego, and other Unanswerable Questions with Remahn Farley 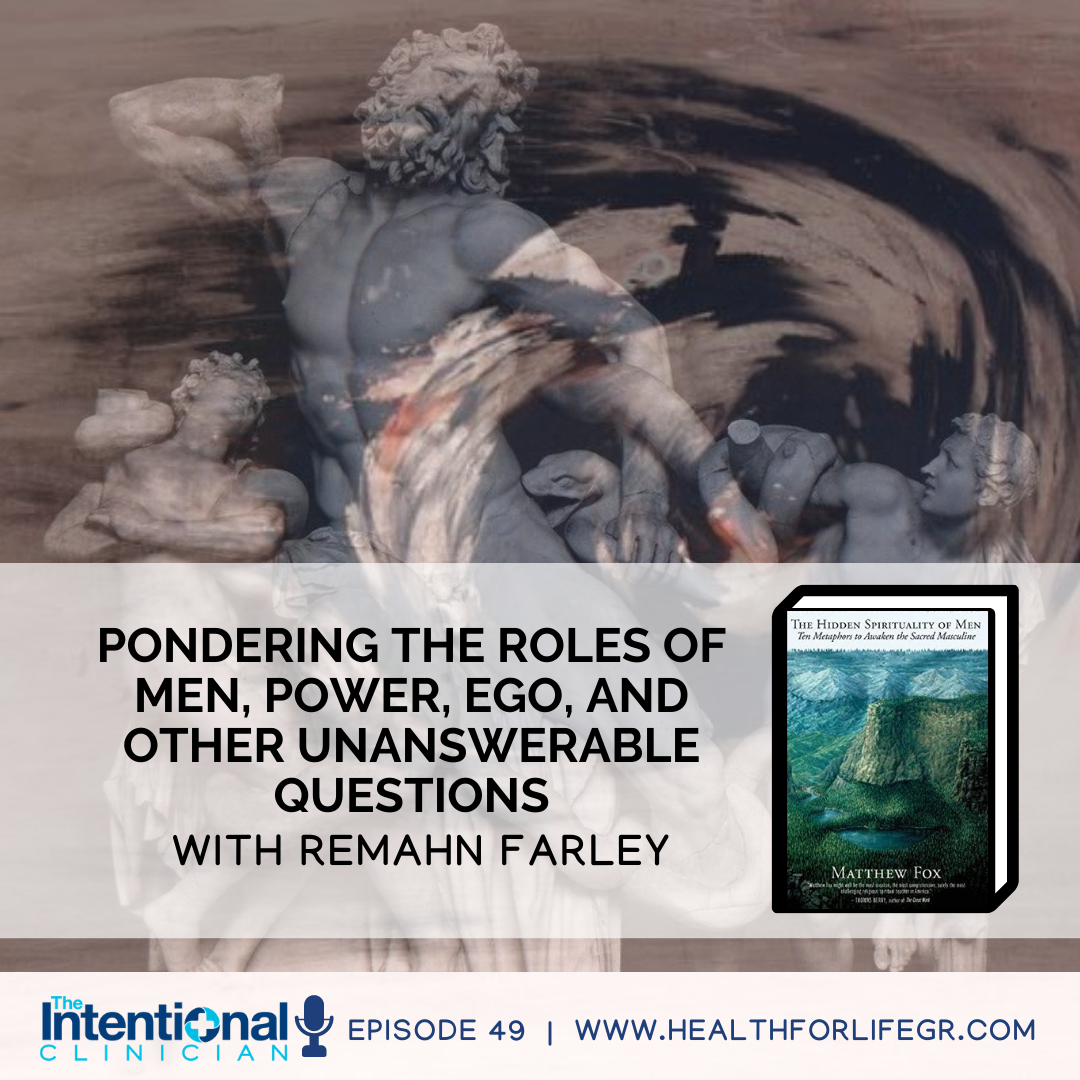 [Episode 49 of the Intentional Clinician Podcast]

Paul Krauss MA LPC begins this episode of the Intentional Clinician Podcast by giving some background to the discussion that is to take place. Paul reads from and comments on Matthew Fox’s Book: The Hidden Spirituality of Men: Ten Metaphors to Awaken the Sacred Masculine. Together, Paul and this material raise many questions that are facing the culture today. Paul especially focuses on the topic of masculinity, and maleness in the culture of the United States—and the challenges facing men and boys today. Following this, Remahn joins the conversation which was recorded in March 2019.

Remahn Farley and Paul Krauss MA LPC have an honest discussion in the moment about their thoughts about an array of unanswerable global questions mostly concerning what it means to be a man, and the confusion and change that men are going through in western culture. Both Paul and Remahn reflect on their personal experiences growing up and how this affected them as males.

Also discussed: The need for men to discuss issues and not bury their feelings. Where are the male role models today? Making decisions from an ego or making the best decision for the situation. Is it ok for men to display vulnerable emotions in today’s society? #MeToo Movement. Matthew Fox’s book The Hidden Spirituality of Men: Ten Metaphors to Awaken the Sacred Masculine. Instant reactions versus responding. Stereotypes of Men not displaying emotions. The effects of the instant news media and social media. Twitter. Free speech and the marketplace. Changes in gender roles in the United States. How you are taught indirectly while growing up. Men learning from authentic conversations with women. How do you go deep and talk with men? Evolving and growing and changing your viewpoints. Hanging on to older viewpoints. Growing up in the patriarchy. The influence of different roles and lessons. Attempting to understand other people and their viewpoints. How do you have balance? How do we deal with vulnerability and shame? When are men allowed to express their emotions? Tribalism. A larger consciousness. As a culture, are we on the same team, or is life about productivity and power? It starts with the personal and then works toward the collective. How do we empower men, instead of reacting to the women’s movement? How can men and women work together in the culture? How can men evolve and lead better? How do men gain power in ways that are ethical—and translate that into authority? How can we be pro-human? Why is authoritarian power emerging? Why is emotional intelligence important? Courage. Hero worship. The grey areas of trying to “Do good works.” Follow the money. The Citizens United decision. The difference between what is right and what the law is. Money becoming speech and power. Gas lighting. The need for male role models. Colin Kaepernick. Star Spangled Banner. Questioning the past and then improving your present and future. What do we do with emotions that have not been dealt with? As men, how do we improve our relationships and other things we are involved in? The city of New Orleans. etc.

“All truth passes through three stages: First, it is ridiculed. Second, it is violently opposed. Third, it is accepted as self-evident.”- Arthur Schopenhauer

The Hidden Spirituality of Men: Ten Metaphors to Awaken the Sacred Masculine by Matthew Fox

The Peace of Wild Things by Wendell Berry

I Live My Life In Growing Orbits by Rainer Maria Rilke

“Mathematics” from Black on Both Sides by Mos Def (Spotify)

“Just To Get By” from Quality by Talib Kweli (Spotify)

Remahn Farley, the company’s co-founder and Online Marketing Project Manager has a deep understanding of Search Engine Optimization, Search Engine Marketing, web design and web development, making him a valuable resource to his clients, who count on him to “get it right.”

Paul Krauss MA LPC is the Clinical Director of Health for Life Grand Rapids, home of The Trauma-Informed Counseling Center of Grand Rapids. Paul is also a Private Practice Psychotherapist, EMDRIA Consultant in Training (CIT), host of the Intentional Clinician podcast, Behavioral Health Consultant, Clinical Trainer, and Counseling Supervisor. Paul is now offering consulting for a few individuals and organizations. Paul is the creator of the National Violence Prevention Hotline (in progress)  as well as the Intentional Clinician Training Program for Counselors. Questions? Call the office at 616-200-4433.