Our Album of Original Songs and Stories: Motel (A Conversation with my Brother)

Home >> Our Album of Original Songs and Stories: Motel (A Conversation with my Brother) 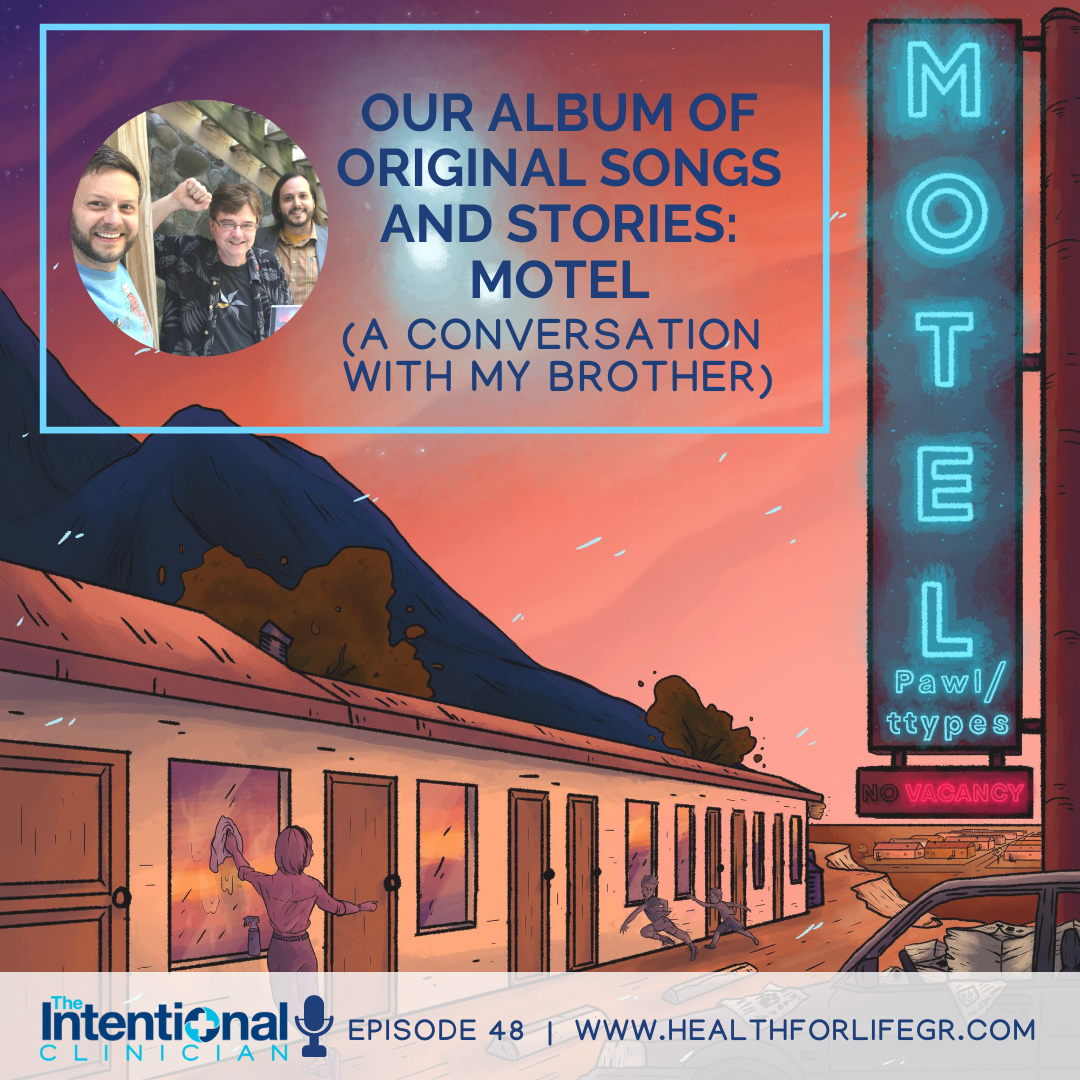 [Episode 48 of the Intentional Clinician Podcast]

If you have ever wondered what your therapist does in their spare time, then this episode is for you. As a professional counselor, I believe in attempting to “practice what you preach.” While the human condition and various life circumstances make this difficult, I do believe it is important for one to maintain an active hobby of some type or another–despite the difficulties of life. We don’t want our job, our relationships, our families, or difficult circumstances to steal our joy. We have to find time and a little space to create or enjoy something that you love–it is important to our mental health. So, if you want to know what Paul Krauss loves to do in his spare time, you will soon learn that music is a large part of his life.

This episode Intentional Clinician featuring stories and original songs by Paul Krauss MA LPC and his brother Tim Krauss. In this episode, you will hear the story of Paul and Tim’s upbringing in a MOTEL and how this inspired them to write and record an album over a period of 9 years, which they named “MOTEL.” The brothers have a discussion and also play clips of songs that they recorded and reflect on the inspiration for the songs, artistic expression, and the importance of storytelling. This is another episode about music in the sporadic series that the Intentional Clinician has released. Music is in an important part of our lives and our human heritage and we hope you enjoy it.

You can purchase a physical or digital copy of MOTEL by clicking here or here.

Free Streaming of “Motel” and other songs by ttypes and PAWL is listed below:

Original Music from MOTEL by ttypes/PAWL

You can find more music, videos, and bonus material by Pawl and/or ttypes here:

Review of MOTEL by Mitchell Hillman of the Phoenix New Times:

The musicians behind indie outfits PAWL and ttypes have teamed up for the collaborative concept album MOTEL to be released Spring of 2020. Brothers Paul and Tim Krauss had an unusual childhood to say the very least, they were raised in a Midwest roadside motel and over the last decade they have been composing an album about that experience. It’s the stuff of American legends, which begs the question do artistic people create unusual lives or do unusual lives create artists?

There is no doubt that growing up around a small town oasis with recurring guests and an ever changing cast of characters will mold your perceptions of life and the world, and these brothers have put that upbringing to music, beautiful, catchy music. MOTEL is a near hour long summary of the years spent at the motor inn, the people and events that shaped them, and the growth that was forced upon them. It’s as much a coming of age story as it is a reflection in later life of the place they called home set to an Indie Pop backdrop that captivates the listeners attention from beginning to end.

The fifteen songs on the album are a sheer delight for anyone that’s a fan of Brian Wilson, Ben Folds, T. Rex, Apples In Stereo, Elephant 6 and music that makes your head bop, your toes tap, your hips swing all while wearing a grin. It’s also an amazing journey in storytelling as the brothers recount the innocence of childhood, nostalgia for rainy autumn days, weird goings on at a nearby lake, early experiences with women, their own relationship as siblings and an evening of a possible UFO sighting. They also present vignettes on the strange guests they encountered from a wanted criminal to a charlatan preacher to a Vietnam vet with PTSD who hoards newspapers.

The album is filled with singles ready for radio right out of the gate, tunes like “Good Boy Young,” “Colorado,” and “Captured Light” all of which will punch through your day with sunshine fix. The T. Rex influence on “The Shore,” “You’re My Brother,” and “Jealousy” make for easy rockers to get into that sound like instant classics through nostalgia colored glasses. Meanwhile “Small Town” and “Newspaper Mountains” evoke the best of Ben Folds. That’s only half of the album, while the rest will keep you tuned in and your headphones on as the stories of their youth unfold before you.  The lyrics are as captivating as the Indie Pop pastiche that surrounds them, with flawless vocals and layers of harmony.

While Paul and Tim are the main men behind the music they had a little help from their friends in making MOTEL.  Christopher Kennedy (No Volcano, Kingfathand, Colorstore) contributed drums, guitar and bass throughout; Conrad Shock (Conrad Shock and The Noise) laid down some bass, guitar, and banjo; while Dan Julian contributed drums, Sean Maginity played guitar on “Colorado”, Jim Rockwood provided drums for “Room 5” and their lead producer, Jupiter Jones helped out with synth, organ, back-up vocals and co-wrote “Room 5” with the brothers.

Check in to MOTEL and check it out, the musical journey through time and space is an amazing one for your ears to behold.  You’ll find yourself singing these songs to yourself, days later and that’s when you know you need to spin it again.

–This episode discusses the concepts of how growing up in a certain dwelling place and neighborhood shapes one’s view of people, of what home is and isn’t, long-term projects, art for the sake of expression, and more. Also discussed: the relationship you have with a space and a place. Identity. Music. Art. Pianos. Remembering the same event from two very different perspectives, and more. —

Paul Krauss MA LPC is the Clinical Director of Health for Life Grand Rapids, home of The Trauma-Informed Counseling Center of Grand Rapids. Paul is also a Private Practice Psychotherapist, EMDRIA Consultant in Training (CIT), host of the Intentional Clinician podcast, Behavioral Health Consultant, Clinical Trainer, and Counseling Supervisor. Paul is now offering consulting for a few individuals and organizations. Paul is the creator of the National Violence Prevention Hotline (in progress)  as well as the Intentional Clinician Training Program for Counselors. Questions? Call the office at 616-200-4433.